A new specific management has been integrated for the new model of fully automatic Intermac machines called LMH, for cutting laminated glass.
To ensure the automatic management of LMH machines, a new logic for rotations (both downstream and upstream) has been developed by introducing new parameters and considerations on the cutting pattern.
A particular logic has also been implemented for the movement and rotation of the pieces containing shapes, to ensure the automatic cutting of the same.
The lengthening of the cuts on the edges is also managed in the event that the final waste is below a defined limit, to avoid problems in expulsion.

In the measurement fields, such as dimensions, thickness, weight and grinding, it is now possible to define the format for the number of decimal places in c/printf format. In addition to the already present possibility of formatting the field as a string (for example% 04s), it is now possible to specify the float format% 0N.Mlf (N = number of integers, M = number of decimal digits). If there are no decimal digits, only the whole number is shown.

By default, the measurement fields now adapt to the unit of measurement defined within Perfect Cut, but it is possible to force the printing of the fields in other measurement units of your choice. 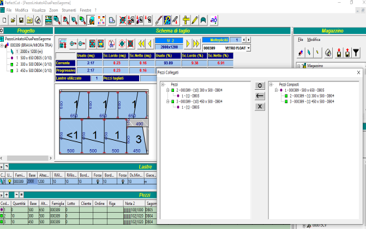 In general configuration it is possible to define a second «shape path» (defining path1 | path2), which is used when the «Open» button of Perfect Shape is used.
Through the menu «File», «Export bitmap layout» it is now possible to export the cutting layouts in PNG format. The files are saved in «Path Export» (General Configuration).
This export is also callable via batch commands using the PNGL command.

In the import window of the files generated by Lisec it is now possible to limit the number of folders to be displayed directly from the “View” menu of the window or in hidden configuration. The folder limit corresponds to the day limit, and by setting the limit to 0, the entire content is displayed.

Perfect Cut is now able to generate files for the new Lombarda Macchine bender, using the LOMBARDA.INI file to define the information relating to the spacers inside the projects.
For Rjukan bender output, the management of a specific Rjukan configuration has been added via the RJUKAN.INI file, replacing the use of GENERIC.INI.

In the case of combined machines between laminated and monolithic machines (for low emissivity or labeling) the PATTERN section has been corrected, and the management of the mirroring of the shapes has been implemented in case the display of the layouts is set to the right (mirrored) on the monolithic cutting machine.
For Perfect ONE licenses, a message requesting confirmation is now displayed when a numerical control is forced.

Output has been added for Bavelloni machines with REV732 Flexium and SYNCRO REV1 versions, now selectable in “Machine Type” in the numerical control configuration.
It is also possible to set «NO XOFF» to avoid inserting the end of file character in ISO files, which in some cases is not wanted.

In the parameters for the labeller, the “Rotate shapes 180 degrees” parameter automatically changes the pieces with shapes with 0-90 ° rotations into 180 ° -270 ° rotations.
By setting “Correction”, an additional correction is also performed in the position of the label in the case of shapes rotated 0-90 ° to manage a problem on labeling in Bottero numerical control.

We use cookies to ensure that we give you the best experience on our website. If you continue to use this site we will assume that you are happy with it.Ok Thanks